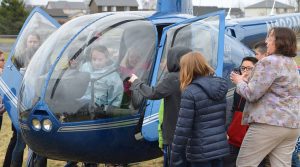 Moses Lake Christian Academy students enjoyed a rare treat Wednesday afternoon when a team of pilots from the Inland Helicopters school landed a helicopter on the school’s playground. The Inland Helicopters program has worked out of Big Bend Community College (BBCC) for four years, according to pilot and U.S. military veteran Stephen Henry. Henry piloted the helicopter that landed at Moses Lake Christian Academy (MLCA) Wednesday afternoon in front of students and staff.

“A lot of rules changed with the VA and there wasn’t enough private pay,” Henry explained, “because for every five veterans we have to have one private pay. So it didn’t work out with the school. It’s unfortunate because it was a great place to fly. You guys have a lot of good flying weather here.”

Henry completed his training through the program at Big Bend and recently completed the necessary certifications to teach others to fly. During his time in the military, he was the recipient of three Purple Hearts.