After lighting up the nets around eastern Idaho, Hillcrest High School’s Nash Austin will be taking his talents to the Northwest Athletic Conference next winter.

In the presence of family, teammates, coaches and administrators, Austin signed his letter of intent with the Big Bend Community College men’s basketball program on Wednesday in Hillcrest head football coach Jeff Marshall’s classroom. The senior was recruited as a point guard and shooting guard for the Vikings.

The son of Hillcrest head coach Dave Austin said he has been playing basketball for as long as he can remember, and Wednesday was a day he had looked forward to for a long time.

“I’ve dreamed of playing in college ever since I was a little kid,” Austin said. “I just feel blessed for all the work I’ve put in. It proves if you want something, you can go get it.”

Austin is the latest in a long line of eastern Idaho recruits to join Big Bend’s basketball programs. One of the most recent District 6 recruits to make his way to the two-year Moses Lake, Wash., school was Skyline’s Jai Jai Ely. Austin said he spoke with Ely during his official visit over Easter weekend.

Like Ely, Austin aspires to continue playing after two years after Big Bend. 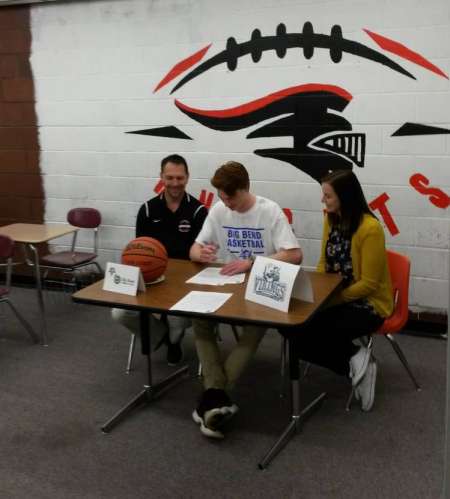