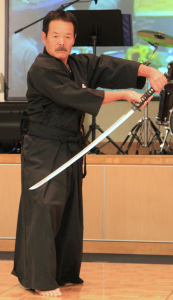 Iaido is the art of sword drawing emphasizing smooth, controlled movements of drawing the sword from its scabbard, striking an opponent, removing blood from the blade, and replacing the sword in the scabbard. Former Japanese Agriculture Training Program trainee Kanenori Tsumori performed an iaido “kata”during the 50th anniversary of the relationship between JATP and BBCC on July 15. Few iaido practitioners use a sharp-edged sword (shinken). Tsumori, who has cut his fingers practicing with the shinken, presented the blunt-edged sword (iaito) to BBCC President Terry Leas for later display on campus.