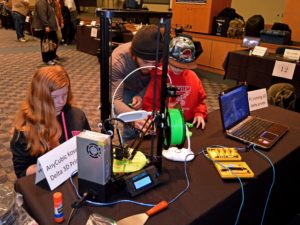 MOSES LAKE — Big Bend Community College will host its second Raspberry Jam Saturday, March 2 from 10 a.m. to 4 p.m. in the Advanced Technologies Education Center (ATEC). The event supports the promotion of STEM education and is being held in honor of the seventh birthday of the pocket-sized Raspberry Pi computer.

Only about 20 of these events happen inside the United States, and just three in the state of Washington. Last year’s Jam, the first at Big Bend, drew hundreds of local community members to the college.

“Last year’s event was more successful than we hoped it would be. We weren’t sure what to expect in putting together the inaugural Jam, but it was a pleasant surprise to see that Raspberry Pi and interest in it runs deep in our community,” said Raspberry Pi Coordinator Jim Leland. “It’s very encouraging to see the region’s youth and industries embracing such a powerful and influential technology.”

Participants of this year’s Jam will have the opportunity to get hands-on with microprocessors and microcomputers and see them in action in 3D printers, medical simulation manikins and Unmanned Aerial Vehicles (drones). There will also be opportunities to fly a drone simulator and experience virtual reality.

In addition, there will be several models of Raspberry Pi to experiment and play with including the amazing Pi3, the tiny Zero, the versatile Zero W and even a Retro Pi with hundreds of old school games.

BBCC will also have representatives from several programs for participants to interact with, including Computer Science, Simulation Technology, Mechatronics, Unmanned Aerial Systems (drones), and STEM Center.

“Participants will see the return of some of the favorites this year, like the Medical Simulation manikin, Virtual Reality and Retro Pi, as well as the addition of some interactive booths where kids can actually build simple robots to take home, or learn more about the power of Pi and coding from a certified Raspberry Pi educator,” said Leland. “We expect to see more community-created projects on display as well.”

Participants will also have the chance to win prizes, including a Raspberry Pi3 or Circuit Playground Express. You must be present to win, but winners will be announced each hour.

This event is free and open to the public, but we do ask participants to consider bringing a can or box of non-perishable food to support the Viking Food Pantry — a resource for the Big Bend campus community.