A $100,000 gift to the Big Bend Community College Foundation from Col. Clyde W. Owen (USAF Ret.) was announced today by the college.

Owen, a Foundation board member for 10 years, was the last Commander of Larson Air Force Base and the first Executive Manager of the Port of Moses Lake.

The cash gift comes as BBCC struggles with severe budget cuts. Owen agreed to spread his donation among needs for nursing equipment, professional/technical equipment, matching funds for an endowment, and for student scholarships.

“The college is one of the most important resources of this community. I’ve enjoyed every minute of working with the college and the foundation board,” said Owen.

He said he hoped other friends of BBCC who are in the position to do so will consider following his lead.

Col. Owen helped BBCC acquire its current 154-acre campus when the base closed–about the same time the Port of Moses Lake acquired its land and facilities.

“Col. Owen is a cornerstone of community support for the college,” said BBCC President Bill Bonaudi.  “His latest gift is another example of his pride in Big Bend Community College, which has grown up on the site of his last Air Force command. “

One of the least known and most important services Col. Owen did for the college was saving from the trash heap the architect’s drawings for the campus buildings when the base closed. Those drawings have been invaluable over the years as the college converted military buildings for use in higher education.

Owen, 93, was a Kansas farm boy who flew 43 combat missions in a B-26 Marauder before being shot down at the battle of Anzio during World War II.  He flew 24 different aircraft, including the B-52, logging 6,000 flight hours. Much of his military career was spent with Strategic Air Command.

This year Owen resumed a public relations role for the Moses Lake community as it hosts Fairchild Air Force Base personnel while runways are rebuilt. Clyde is on the short list for invitations to lunch with visiting three-star generals and the Fairchild base commander.

Owen started a scholarship fund for flight students a decade ago, and financially supports  foundation special events and campaigns. His latest gift puts him at more than $130,000 in lifetime giving to the BBCC Foundation.

Donors with $100,000 or more in lifetime giving are recognized with a bronze in the ATEC gallery. Clyde’s bronze will depict him as a young Air Force Colonel.

“Everyone at BBCC is pleased Clyde will have a bronze because his life story is an important part of the history of our college and community,” said Doug Sly, Executive Director of the BBCC Foundation. 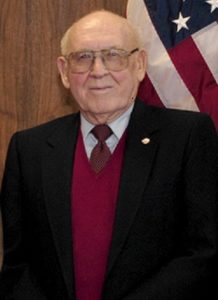 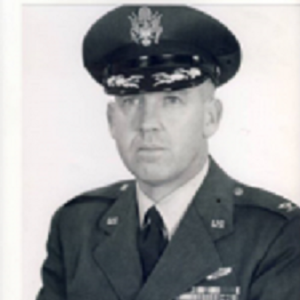 Next
Covid-19 InformationRead More On Covid
+