The Equity Award recognizes an individual or college program that has demonstrated success in furthering equity and student achievement in the community and technical college system.

“It is impressive that competing with nominations from more than 30 community and technical colleges, BBCC received so much recognition at the annual awards ceremony of state trustees,” said BBCC President Terry Leas.

Blakely’s recognition comes toward the end of his second term on the BBCC Board of Trustees. He also serves on the BBCC Foundation Board.

“Mike continually reaches out to students and encourages their attendance at BBCC, often bringing them to campus and introducing them to student services personnel,” said fellow BBCC Trustee Jon Lane. 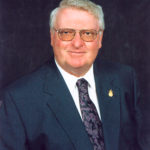 “Mr. Blakely has been a huge influence in my life,” said Miraclejoy Curtis, a BBCC student who received a TACTC Transforming Lives Award earlier this year. “Through him, I was able to meet legislators in Olympia, earn money for college, believe in myself, and have hope for a successful future.”