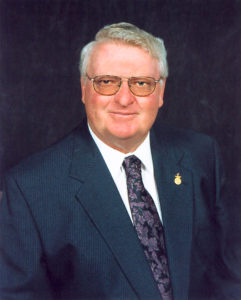 Mike Blakely of Quincy was honored with Trustee Emeritus status by the trustees of Big Bend Community College on August 6.

“One of the reasons Big Bend has received so much state, regional, and national recognition in recent years is because Mike, as a trustee, encouraged the college family to write and submit the recommendations for the awards,” said Terry Leas, BBCC President.

“He recognized excellence at Big Bend and took the position that we should be proud of it and spread the word. He didn’t miss an opportunity to brag about BBCC students and staff.”

A Grant County resident for more than 40 years, Blakely has ties to Future Farmers of America, the Quincy Leadership Roundtable, the Columbia Basin Sheep Producers, the state Agriculture Education Task Force, and many other organizations.

Blakely served as a trustee from 2004 to 2014 with perfect meeting attendance. He was board chair and vice chair twice in 10 years. He received the 2014 Trustee Leadership Award from the state Trustees Association of Community and Technical Colleges in 2014, and received the Pacific Region Trusteeship Leadership Award the same year from the national Association of Community and Technical Colleges.

It was common for Blakely to personally reach out to students in Quincy—especially low-income and minority students—and bring them to campus to introduce them to student services staff. He wrote many scholarship recommendation letters for students, and he checked on their progress.

When a generous donor started a fund to helped students deal with short-term financial emergencies, nobody understood the concept better than Blakely. He established a relationship with the donor and personally directed students to the emergency assistance that kept them in school.

“Mike is an intuitive thinker who was relentless in his efforts to ensure BBCC accomplishes its goals and mission,” said Jon Lane, BBCC Trustee.