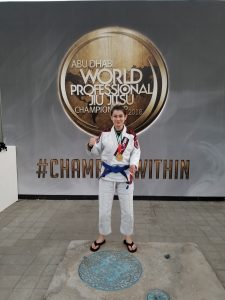 She’s friendly, laid-back and makes jokes about staying up too late to do homework. She finds ways to balance work and school, talks excitedly about her involvement in clubs on campus and her plans to transfer from Big Bend to Western Washington University to study Psychology in the fall.

But behind the scenes, Jess is humbly blazing a trail for women in the Brazilian Para Jiu-Jitsu world.

Standing on the podium in Abu Dhabi and receiving her second Gold medal was a surreal feeling for Jess.

“If you looked at who I was in the past, you would never have guessed that I would end up here, on this path,” she said. “I got to prove everyone wrong who said I couldn’t do this.”

Up until about three years ago, Jess admits she was living a very negative lifestyle.  She explains that during birth, she suffered a Brachial Plexus injury which has resulted in severe nerve damage and left her with limited mobility in her left arm.

Years of dealing with bullies at school led to a lot of self-doubt and self-loathing.

“I listened to all these negative things and told myself a lot of negative things,” she said. “I would hurt myself, starve myself saying that I was too fat and even blamed myself for my disability.”

Things changed one day when she saw that a self-defense seminar was being offered on campus.

“I wasn’t religious at the time, but I just felt God telling me that I needed to be there,” said Jess.

So she went, and oddly enough, ended up being the only person to show up to the seminar. The instructors, Luis Alvarez and Jeremy Seda, didn’t let that phase them and instead of cancelling or rescheduling, they went on with the class.

“They looked at each other at first unsure about how they were going to teach me, because they already saw my arm,” she said. “But they stuck with it and helped me see that I could find a way to defend myself no matter what my limitations were.”

Both Luis and Jeremy were experienced Brazilian Jiu-Jitsu (BJJ) athletes. They got to talking about BJJ and before the class was over, Luis had invited Jess to visit his academy, Imperial Jitz, in Ephrata.

“I think he was just trying to be nice, I don’t think he thought I would really show up,” said Jess. “But I showed up to his next class, jumped into it and I’ve been stuck in Jiu-Jitsu ever since.”

Jess says the last couple of years have involved a lot of mental healing on her part, something that most likely would not have happened were it not for her involvement in Brazilian Jiu-Jitsu.

“It’s amazing what Jiu-Jitsu can do, if you are a person with limitations whether mental or physical, it can help you,” she said. “I’ve seen firsthand how your mindset goes from negative to positive and that drove me to stay with it.”

She’s also seen an improvement in mobility since starting training. She found that even though she wasn’t using her left arm, smaller muscle groupings that she wouldn’t have thought to train were still getting worked.

She can now rotate her left shoulder, pinch her left index finger and thumb together and slightly move the rest of her fingers, which is a huge accomplishment.

But participating in Jiu-Jitsu still has its challenges for Jess. She regularly trains with able-bodied athletes, and competes against them in tournaments, even though she’s at a slight disadvantage at times.

“In a typical match you use all of your limbs,” she said. “And grips are very important, but I only have one grip so it’s a disadvantage versus my opponent who can get two grips on me.”

Jess also has difficulty posting on her left side, which makes it easier for her opponent to get on top of her. But she doesn’t let her limitations hold her back or discourage her.

She recalls a past match where she was only one point away from winning against an able-bodied opponent. All she had to do was get her foot out from under her but she ran out of time.

“I felt so discouraged but also enlightened because I didn’t win but I beat her,” said Jess. “I went the full five minutes without being submitted and I think that’s a win. It triggered something, that I’m really rad for going against an able-bodied girl for that long and to me that’s a win.”

While there are para athletes in the Brazilian Jiu-Jitsu world, and some with more severe limitations than Jess, the idea of Para Jiu-Jitsu divisions in major tournaments is only now starting to catch on.

The two Para competitions Jess participated in were the only ones she knew of, she said. The tournament in October was also the first time that organization had a Para division available.

Jess hopes that more Para divisions open up for competitors around the country, and the world.

“It’s so rewarding for athletes with limitations to compete and work their game against people equally at their level,” she said. “I know firsthand how great it was to test my skills against someone who had the same limitations I did.”

So what’s next for Jess? Besides schoolwork, actual work and extracurricular activities, the answer is training –lots of training.

Jess plans on competing in the Revolution tournament in Western Washington in July with her Imperial Jitz team, the International Brazilian Jiu-Jitsu Federation open in Seattle in August and a Grand Slam in California in September.

“Life kicked me in the gut but I’m still standing,” said Jess. “As long as you keep working you will be successful.” 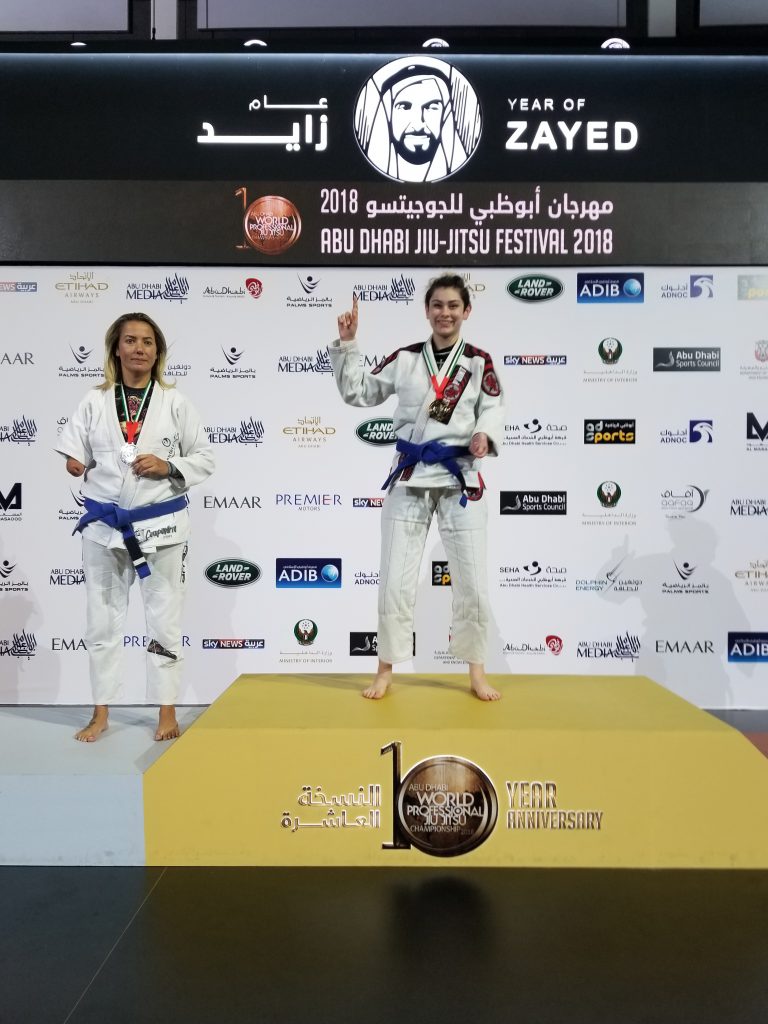