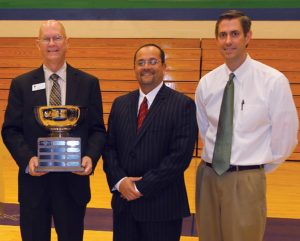 For the second time in four years, Big Bend Community College has been recognized by the Northwest Athletic Conference(NWAC) for the scholarship of its student-athletes with the Vikings earning their second Presidents Cup.

The award is presented each year to the institution whose student-athletes have the best performances in the classroom.  Points are awarded for those who complete 36 credits, 72 credits, and for certificate or degree completion.  The amount of points awarded are determined by student-athletes GPA.

“This recognition from the NWAC confirms that our student-athletes are students first,” said Big Bend Community College President, Terry Leas. “We are proud of our athletes’ success and our coaches for emphasizing the importance of success in the classroom and on the court/field. Our coaches continue to support excellence in teaching and learning.”

“This recognition highlights the quality of student-athletes our coaches are recruiting and the success of BBCC’s academic and support programs,” said BBCC Athletic Director Preston Wilks.

The Big Bend Athletic Department and its athletes will be honored with the presentation of a banner in a ceremony to be scheduled at a later date.