The Big Bend family transforms lives, and you have been recognized for being one of the best at it. Big Bend grad Cristian Ramon impressed everyone at the Trustees Association conference in Olympia. Congratulations to faculty and staff at Big Bend! See the attached photo of Cristian and Trustee Mike Blakely. 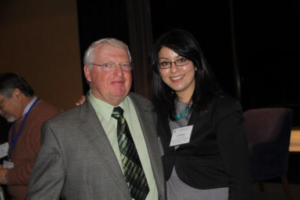 Cristian Ramon didn’t think she could continue her education after graduating with honors from Quincy High School in 2009.

Now she’s been honored as one of the best examples in the state of how community colleges transform lives through education and support.

Ramon didn’t have the resources to attend a university. She thought she would settle for being first in her immediate and extended family to earn a high school diploma.

Mike Blakely, a Big Bend Community College Trustee from Quincy, spotted Ramon’s potential while judging her senior project presentation. He helped her find scholarship resources, and made sure she enrolled at Big Bend.

“Graduating high school was a time of despair because I did not think I would go beyond that achievement,” said Ramon, who is from a migrant farm worker family.

Ramon thrived at BBCC and graduated with honors in 2011. “At Big Bend, I learned to love chemistry and truly listen to the music,” she said.

She was accepted to the University of Washington last summer, earned more scholarships, and is now aspiring to earn a Masters’ in Neurobiology.

Ramon’s story is an inspiring example of how community colleges transform lives. On January 23, she was one of five community college students receiving “Transforming Lives Awards” from the Trustees Association of Community and Technical Colleges.

Ramon was selected from 35 nominees—one from every community college in the state. By being selected in the top five, she received a $500 award, which she immediately set aside for tuition at the UW.

Being in the top five also placed her in front of 400 college trustees, presidents, and state legislators. She told her story, participated in a panel discussion with the other four recipients, and was featured in a video production with the top five.

Blakely and other Big Bend Trustees looked on with pride as Ramon showed poise and confidence in front of the large crowd.

“One thing I want to make clear is you get just as good an education at community college as you do at the university,” she told the crowd.

All five recipients were adamant they would not have succeeded in higher education had they started at a university instead of a community college.