Nine Big Bend Community College student athletes have signed their Letters of Intent to continue their baseball careers at four-year colleges and universities. The athletic staff honored those athletes with a signing ceremony this week in the Peter D. DeVries Athletic Center.

New Head Coach Jameson Lange, who is beginning his first season as Vikings head coach, said he expects for all nine of these student athletes to excel on the diamond and in the classroom.

“These are all exceptional young men,” Lange said. “They have great character and understand the importance of excelling in the classroom as well as on the playing field. I fully expect that these guys will not only succeed at the next level, but also in life.”

The Vikings finished this season with a 25-17 record (13-15 in the NWAC East) and missed the conference playoffs for the 14th consecutive season. 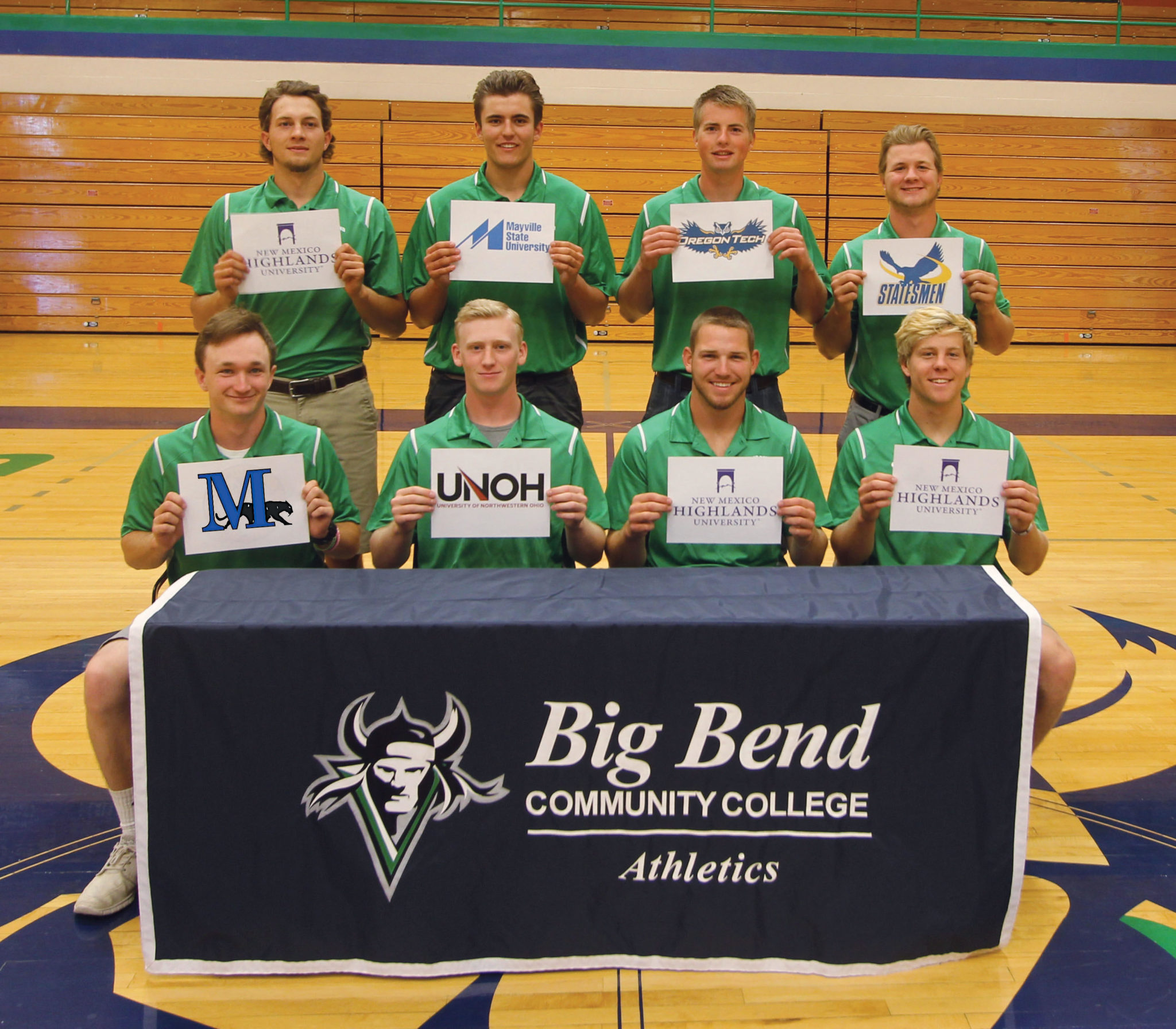 DeHoog hit .270 this season for the Vikings and scored 21 runs while driving in 27. He had 34 hits including five doubles, two triples, and three homeruns. Mainly in leftfield, DeHoog was a solid defensively this season playing 219.1 innings with 49 putouts and committing just a single error.

Francis hit .304 this season for the Vikings and scored 39 runs while driving in 31. He had 45 hits including 13 doubles, 6 triples and led the team in homeruns with six. Splitting time between right and center field, he played a total of 327.2 innings for the Vikings committing just three errors with 84 putouts and five assists. Francis was also a First Team Eastern Region NWAC All-Conference outfield selection.

Whitlock made 13 appearances on the mound this season for the Vikings with one start. He totaled 22.1 innings and picked up three wins and one save for Big Bend finishing the season with a 3-0 record and 23 strikeouts. Opposing conference hitters managed only a .253 average against him this season.

Stohr made nine appearances and picked up five starts this season for the Vikings and finished with a 2-2 record overall and a .280 ERA. He struck out 26 hitters in 35.1 innings of work. Opposing hitters managed only a .209 average against him this season.

Lundin made 16 appearances (two starts) on the mound for Big Bend this season and boasted a .143 ERA in 37.2 innings of work. He finished the season with a 2-0 record while striking out 33 hitters and giving up just six earned runs. Lundin also had one save to his credit. Opposing hitters managed only a .223 average against him this season.

Kalstrom was solid at the plate in 2017 hitting .348 in 161 at-bats. He picked up 56 hits (seven doubles) with four homeruns and drove in 39 runs on the season. At first base, Kalstrom boasted a .984 fielding percentage making just two errors in 125 innings, recorded 118 putouts, and had five assists. Josh was also selected to the NWAC Eastern Region’s All-Conference Second Team as an infielder.

Ball caught 158.2 innings behind the plate this season for the Vikings and committed just a single error with 115 putouts and 12 assists.  At the plate, he hit a solid .291 (.302 in NWAC) with 79 official at-bats. Ball picked up 23 hits including one double, two triples, and two homeruns and picked up 15 RBIs.

Reisbeck batted .331 this season for the Vikings with 130 at-bats. He picked up 43 hits that included seven doubles, a triple, and two homeruns. He stuck out just 10 times and scored 26 runs. Seth played 306.2 innings at third base and had a .895 fielding percentage with 59 assists and 35 putouts.