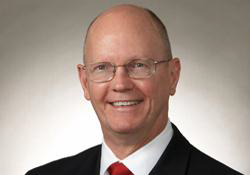 Dr. Terrence Leas has been hired President of Big Bend Community College by the Board of Trustees.

Leas accepted the position after Trustees voted unanimously on June 11 to offer him a contract. When he starts work on August 23 he will become BBCC’s seventh President in its 50-year history. President Bill Bonaudi retires June 30 after 17 years at the helm.

Leas is currently President of Riverland Community College in Minnesota, a position he’s held since 2003. He has ties to Eastern Washington, previously serving at Yakima Valley Community College as a campus dean, dean of students, and dean for institutional effectiveness. He was also dean of basic skills at Yakima.

Leas has served on the Southeast Minnesota Workforce Investment Board since 2005 and on the Minnesota Governor’s Workforce Development Council since 2007.

An expert in the law of higher education, he has published articles in many law publications. He served as President of the Education Law Association in 2000. He has been active in professional and community organizations, including serving as a president of Kiwanis and Rotary clubs.

Trustees said their visits to each of the three finalist’s campuses made the difference in coming to a unanimous decision. The other finalists were Dr. Anne Temte, President of Northland Community and Technical College in Minnesota, and Denise Yochum, President of Pierce College Fort Steilacoom.

Trustees completed the search in four months. The process brought together many college and community constituencies for screening and evaluation of applicants.